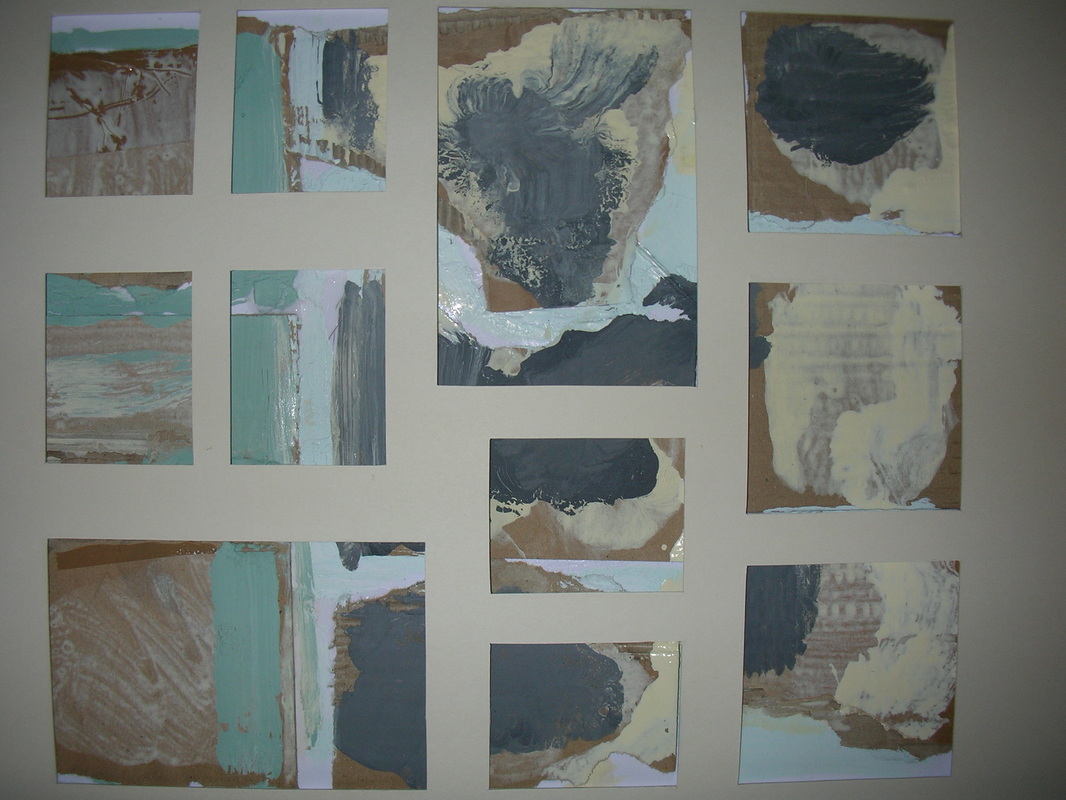 11 Small Paintings (PAINT)
My present series of work is an obsession with the similarity of the huge Atlantic clouds that float over Cornwall whilst resembling the very granite boulders and blocks themselves. I have united this similarity through compositions utilising household paint and torn cardboard, sustainable mixed media to paint the rugged stones which builds my cottage whilst unlocking the subconscious landscapes and designs of the out of work miners that built them.

…is an ‘Outsider’ group, outside of ‘Cornish Tourist Art’, seeking exposure and representation, formed to generate an alternative viewpoint and argument to the funded imagery represented by the majority of galleries and institutions in Cornwall; itself a business dealing with moribund investments and interests, a result of the effects of a ‘cultural policy’ brought about by the distortions of funding in society in general.

‘others beyond the imposed margins of society and the art market’.

Jean Dubuffet; himself an outsider artist, stated that: “…one would have to grapple with a host of unpredictable and culturally illicit forms of expression”, to try and define outsider art.

Dubuffet worked with the ‘insane’ and was inspired.

The cultural mainstream becomes too comfortable and self- restrained to radically shift; even if it tries to absorb ‘outsider’ ideas and develop its clientele away from what the markets know, and the investor expects. The argument for rejection of an artist’s work therefore becomes a comment on personal failure!

So where does one believe ‘new’ ideas come from, if not from ‘outside’?

Others are now viewed as ‘outsiders’ in context with the ‘margins’ of their times: JMW Turner, Paul Klee, Jackson Pollock, Cy Twombly, and more…

“I am a lonely painter; I live in a box of paints” Joni Mitchell

Patrick Heron, a reluctant yet relative ‘insider’, acknowledged that:

“An artist who does not think that, this time, he or she is risking absolute madness, is no artist at all”!

Would I be listened to, and acknowledged more if I came from an asylum?

My maternal grandmother was considered ‘mad’, and my cousin committed suicide; so where does that leave me, and how, why, or should my work be defined in such terms?

Art is essentially such a private, personal activity in a media obsessed society that just because it is not encouraged to be seen, does not mean it does not exist. If you bothered to listen to, and were concerned with what others thought; would you then allow such an overruling of your own criteria that it raised the question who or what should you be working for. After all, is it not “the delusions that withstand the assaults of reason” (Storr), that surely keep us going?

Picasso, once an ‘outsider’ said, “I paint what I think I see”. Painting, therefore, is a positive thinking process.

Vaughan Warren (Founder of PAINT) acknowledges the assistance and support of The Redwing Gallery in Penzance which represents artists united by a single voice of freedom of expression outside of convention.

Long may they continue…